"Painter's Argument," the title of a painting in Jiha Moon's boffo exhibition at Saltworks gallery, might also serve as a declaration of purpose. 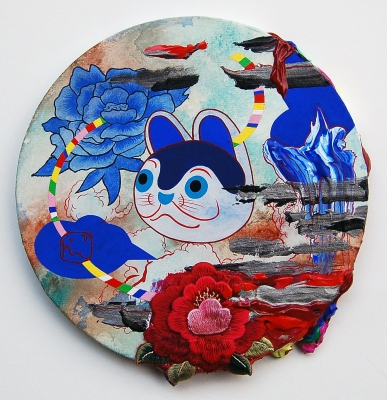 The imagery in Jiha Moon‘s paintings can thunder with laughter, whisper of legends long forgotten and some yet to be lived, and shed mournful tears of dripping blue and pink paint. Her new exhibition, opening at Saltworks Gallery this Saturday, January 23, from 6-9PM, is titled Blue Peony and Impure Thoughts. As Atlanta-based curator Stephanie Greene observes in her essay on the exhibition, “Traditional pink or white peonies represent luxury and wealth—the opposite of lotuses, which signify spirituality—but blue peonies don’t exist in nature.” In our interview below, the artist elaborates on her title and her influences and challenges in creating her recent work.

Jiha Moon studied both traditional Korean painting and Western painting at university in her native Korea. She furthered her knowledge of the latter in the United States, but it remains particularly telling that her early training was based in a system in which the two practices were distinctly separate. In her small- to medium-size works, she has developed a style of painting that is not so much a fusion as a harmonious layer- ing of the two traditions' distinct mark-making and leitmotifs.

Ever recall being told a good story of great joy or regret or sorrow, and later, on attempting a recall, you forget the entire tale except for the feeling attending the yarn? That's a Jiha Moon painting. Ethereal, luxurious, undulating, captivating, carry-you-away from yourself vivid. Hard nails run soft down your back. Can't remember what you saw, won't soon forget what you felt.

Korean-born artist Jiha Moon talks with urbancode magazine in advance of her upcoming solo exhibition at the Curator’s Office micro gallery. The space is located in the District at 1515 14th Street NW, suite 201. Moon’s work will be on view from September 15 – October 20, 2007.